I woke up to the sound of Simon and Garfunkel blasting out (i.e. soothing out) my radio/alarm clock. The mercury screen registrered 10:30am. A quick jump into the shower and then I was set. It's International Food Bazaar day! What else could be more pleasurable to look forward to?

So I head over to Tr.'s place to prepare something that would proudly and gastromically represent our country. It wasn't the ubiquitously favorite phở, nor was it the nostalgic chef-d'oeuvre of the ancient capital bún bò Huế. Limited in the student microscopic universe in terms of time and money, we have chosen nem cuốn and thịt kho tàu as our reprensentants. Not very exciting I know, but nonetheless entertainable. 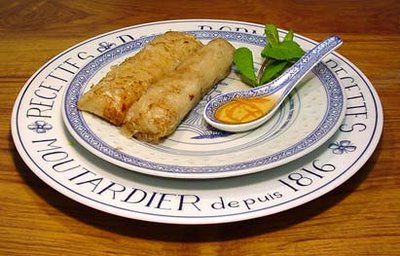 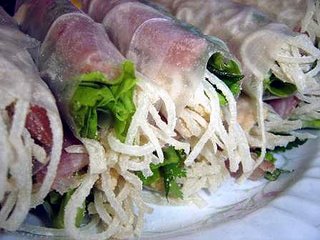 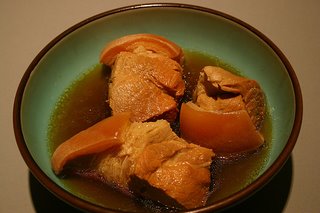 
Enough of the introduction, let's get to the exciting part : the passing of this magnific day...and LOTS of pictures.

So like I said, at 11pm we have started. Or rather, I have arrive at the scene where Tr. has already started. What have I missed out? Tr. has already ướp (marinated) the pork in soy sauce and some secret combination of spices that she wouldn't reveal to me. In addition, she has hard-boiled about twenty chicken eggs (I make the distinction because in Vietnamese cuisine, there is a HUGE difference between eggs of chickens, ducks, geese, chim cút (quails, les cailles) etc.)

The first task was deep frying boiled eggs to be put in thịt kho tàu, as you can see below: All of that is BOILING oil. (Aux francophones, c'est de l'huile extrêmement chaude !!) And the eggs are already taking up that disgusting burn on the outside. But being a Vietnamese, you would say YUMMY instead instead of turning your head away in animosity. Trời ơi thèm quá thèm muốn chảy nước dãi ra luôn!!! It is now 11:00am.

After about 20 eggs and 15 minutes later, this is what we arrived at: Meanwhile, the chicken for nem cuốn is making itself useful in another pot nearby: While I took care of these guys, Tr. went to another kitchen and tackled omlettes. Tonnes of them. Beat them out, pour oil and a bit a vodka "cho nó bông lên" (fluffy). According to strict Vietnamese culinary guides, you make omlettes as thin as possible. That means the moment you put pour the egg mix into the pan, thin it out and pour it right out IMMEDIATELY (in about less than 2 seconds). This is extremely painstaking, but it will be worth your while because thin egg will be extremely easy to roll later on. It's also tasty. Sorry there's no pictures of this process ):


I have been so focused on cooking that I didn't notice we had competitions. Here is a picture of the famous Mexican Pozole cooking up right next to our work. As far as ingredients are concerned, I think you just need tonnes of onions and and like five pigs: Back to our food. Want to take a peek inside that delicious roll? Basically there are eggs, pork, lạp xưởng (sausages), chicken, cabbage, cucumber and cilantro. Here is our secret: And here is a sample of the final product. To be eaten with tương đen (hoisin sauce). I think it deserves the "picture of the blog" award: Finally, and after hours and hours of repeatedly stretching and twisting our hands and fingers in indecent ways, we have amassed a formidable pile of edibles. Fortunately for us, on the other side of the room thịt kho tàu was also shaping up great! Which we have compacted into something more manageable. At 4:00pm, we headed to the Food Bazaar: One of my favorite dish of all time: Butter chicken (aka murgh makhani) from India, makes me think of another great dish: Tandoori chicken: "state dish" of Punjab. To be eaten with butter nan. Very fatty, very decadent, very Punjabi...I'd drooling at this very moment. Kabab from Turkey. Needless to say, the Turkish/Arab culinary culture has spread tremendously to Western Europe, where, in France for example, I have had amazing kabab. Yummmmy. In the picture above it's not cooked yet, but already it's looking so tasty.. And our stall! Nem cuốn and thịt kho tàu, VIETNAM! I have no idea what the dish on the left is, but on the right is Hong Kong Street Special, from Hongkong. 寿司 (Sushi) from Japan! My second favorite dish of the evening. Yet on the echelon of Japanese gastronomy I don't value it as highly as some other dishes, しゃぶしゃぶ for example is something that I would marry a Japanese girl just to eat everyday... Yummyy.....shabbb...shabb....back and forth, back and forth the the beef is for the taking back and forth....slurp slurp.
May I also respectfully point out that 寿司 isn't about the fish, and it doesn't have to be rolled up into little cute pieces. The term 寿司 (sushi) refers to the rice, not the seafood or the toppings. So don't be taken too aback by the picture being different from what you imagined.

And so time passed by...Soon the food bazaar came to an end. The battlefield was intense. Not a single stray of food was left: In the end, I was content, and feeling godly. What else could I have asked for: eating my heart out and enjoying international flavors in an educational framework...Wow.
Posted by Unknown at 2:03 AM 0 comments Categories: English, food, français, tiếng Việt